First Snow in life- A weekend trip to Shimla

Everyone has something that they dream of till now, and when it happens, they term it as their first time. For some, it is going to a sea beach, for few, it's boarding a flight. Well for me, it was seeing and stepping on the snow.

It was a Wednesday noon and I was in deep sleep after a long day in office, when Ayush called asking me if I wanted to go to Shimla. Listening to that, the wanderbug had bitten me and without a second thought, I said "Yes".

Day one.. We were scheduled to leave for Shimla on Friday. We had our tickets booked at Howrah-Kalka express from Old Delhi. So all of us met at a particular metro station and after the introductions to each other, we proceeded towards Old Delhi. The train was completely on time as per Indian railways ( just 20 minutes late ) and we boarded the train, It was mostly empty and this was probably the first time I was travelling in an uncrowded train. The journey was overnight and the night passed with me, Ayush and Ayushi chatting with each other except a few interruptions in between. At pre-dawn, we reached Kalka station and I have to admit, the cleanest station I had seen in a while.

Since it was early about 4:00 am, there were very few souls here and there at the station. We inquired and found how to reach Shimla, you need to either take the bus or hire a cab to Shimla.

While deciding what to do, we decided to pass a bit of time sipping warm tea.

At the end, we decided that taking a cab would be best and indeed it was the best.

At the morning in Kalka station, we decided to take a Cab to Shimla. The route was a winding route through the hills and this was the time I missed my trip with Kanishk and Kartik most. I felt every leaning curves and determined that we will definitely come back here-on bikes. On the way, we had the chance to witness the most colorful Sunrise. We stopped at a place to take pictures but the camera didn't justify the scene.

Sunrise on the hills

After sometime we reached the location of our pickup by the travel organizers car and from there we went to our hotel for a quick freshen up and for a sightseeing around Shimla. The hotel was atop a hill with the best view of the surrounding hills and the snow covered peaks in the distance. 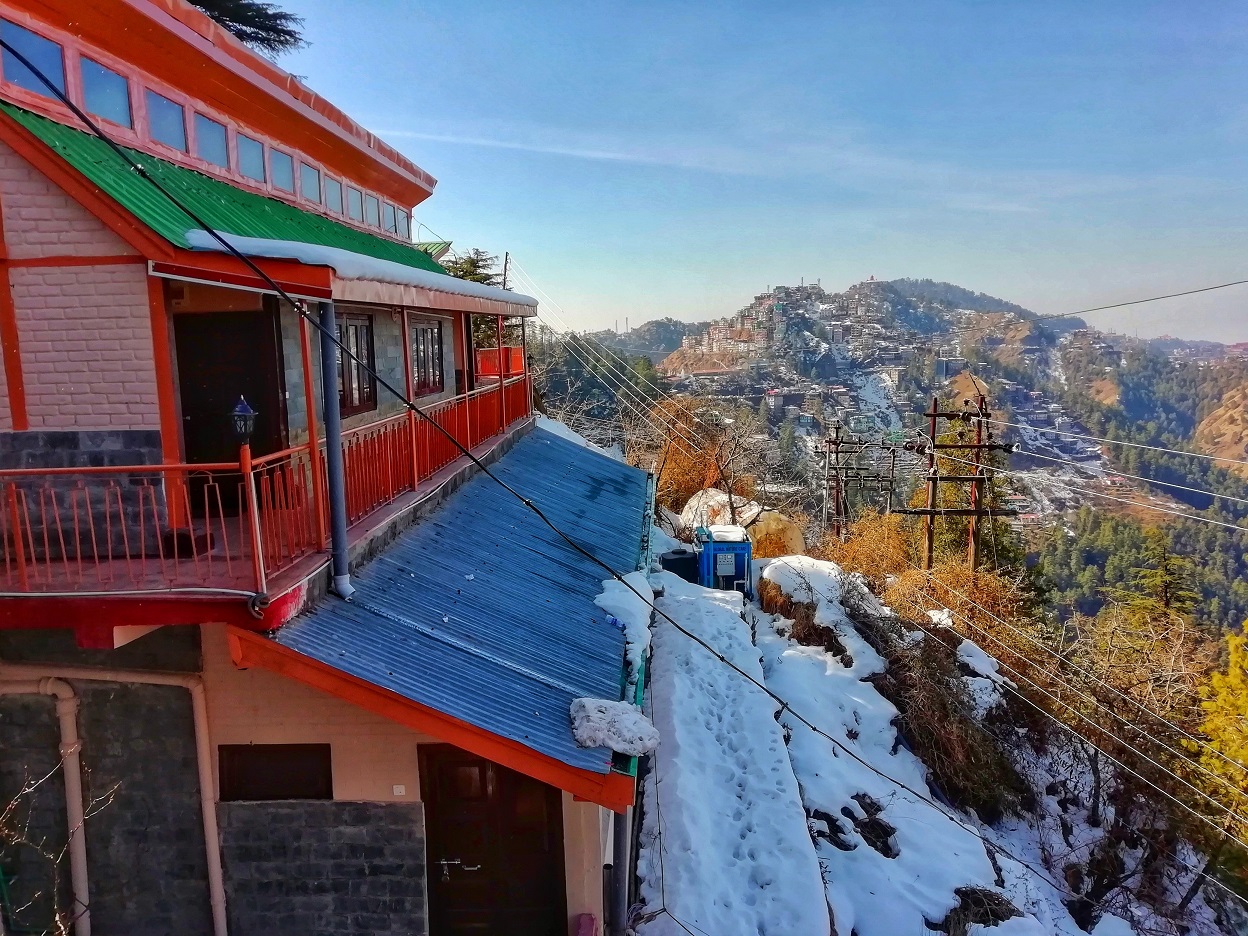 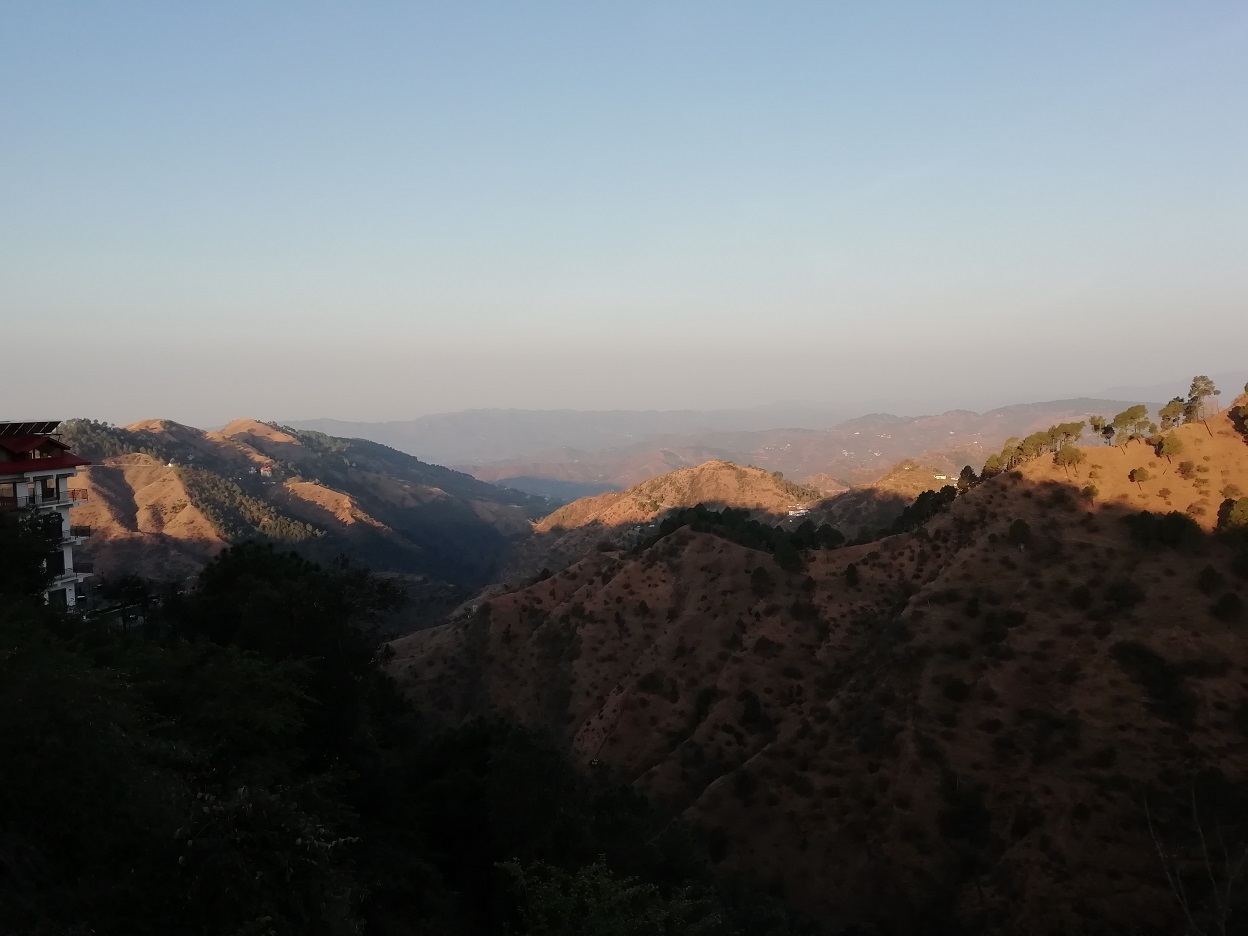 View from the hotel room

For the first time in life, I experienced stepping on snow here in Shimla. The sound of crunching snow beneath my feet was just awesome.

We rested for a while and then decided to go out to see the local attractions in Shimla.

The first place we saw was the Green Valley. Although we didn't stopped here, we passed by the green valley and indeed it was a nature's blessing. The whole place from the top of the hill to the valley below was covered with green forest cover. It was a mesmerizing sight to watch from our cab window when we passed by it.

Our first stop was at Jakhoo Temple.

Also known as the place to visit in Shimla. This place is famous for the tall statue of lord Hanuman standing at 33 meter tall surpassing Christ the redeemer statue (30 meters) in Brazil. To reach here you need to climb a steep climb by road with tight hairpin bends which is enough to make a professional car driver sweat out. Once you reach the car park, the temple courtyard starts. To reach the main temple, you need to take a flight of stairs and reach the top. You don't need to be a worshiper to visit this place and I am sure that the natural beauty of this place is more than enough to pull you. One piece of advice, Don't carry anything that can be snatched, including your cell phones, cameras earphones, caps, even spectacles and loose fitting shoes. The monkeys here are very notorious and professional at snatching stuff. Also, there is no guarantee that whether you will get the stuff back or not. From there we went to Indian Institute of Advanced studies (IIAS) in Shimla.

It was formerly known as the viceral summer palace and currently serves as a museum/academic institution/tourist attraction.

There are paid guided tours for the museum every hour. While you wait for your trip to start, the well maintained gardens and the lawns outside are great to take some awesome pictures and not to forget the palace like building.

Also, if you find carefully, you will find lovely views of the hills and the valleys.

View of the valley from the IIAS

The tour itself was brief, and our guide Raj, was a really nice and informative person who explained us the history and the importance of the place.

The mansion was well maintained and was sprawling with artifacts and even someone who isn't a history buff would go "wow" seeing the works and the inside of the building. Oh, there is one rule, "Be silent, keep your phone silent and don't take pictures inside the building".

After this, we went to the most famous place and the icon of Shimla, Christ Church in the ridge.

We spent our whole evening there wandering about and having our food. This is the place that you see online where it is mentioned "Shimla". This is just a couple of tourist friendly places that happened to be near each other making it the hub of Shimla. You can go to the base of the ridge by car which will drop you at a certain point and from there you can walk through the market to the scandal point and the Christ church. You can spend your whole evening here watching the city below turn to specks of light.

There were numerous things to do here. For the first, getting snow gears like caps and winter gloves if you are planning to visit Kufri next. You can head to the handicrafts market (Lakkad Bazaar) past the church to get some customized gifts from Shimla for anyone. It will also remind you of the old market of Shimla.

We spent our evening here going around the market and the ridge. When we got tired, we headed to our pickup point and from there back to the hotel. When we reached the hotel, we were dead tired but still after a bit of freshening up, we gossiped abut the day over the dinner. And as usual, after the dinner, I plugged into Nirvana and skipped off to the morning of next day.

Day Three... Last Day, while coming from Kalka to Shimla, I tried to take a time-lapse of the sun rise in the hills, but due to time constraints, couldn't take the complete shot.

So I woke up at around 6:00 and after a quick freshen up, I put on some warm clothes and gathered my mobile tripod and headed outside to take a complete time-lapse of the sunrise. Although there was no snowfall that night in Shimla, but the temperature was approx negative 3 degree Celsius and it wasn't long before I realized that I was ill-equipped for this cold and I wouldn't survive if I spent an hour or two sitting here in the cold on top a hill.

So I scrapped the idea of time-lapse and with shivering hands, gathered my gear and headed back to the comfort of my room. After some quick nap, we woke up and got ready to visit Kufri. It was a not a long drive but the long traffic jam made the journey time longer.

One personal advice, if you are coming to Kufri, start early and reach here before the traffic.

On the way, at the rental shops we rented gum-boots for the snow. You can rent here for complete package of gum-boots and snow dress and snow activities. You can also book for a mule ride to the top of Kufri.

On the way to Kufri

My personal suggestion would be to try and avoid to take the rental shoes or dress. The dress will be a dirty and torn one piece Jumper and the boots will be the cheapest gum boots in the market which has a terrible grip and not to mention the pain wearing them. From the base, you can take a mule to the top and return by the same. Scam alert: if you are getting a rental, ask them about the timings as they will charge you for late fees and won't even mention it at first.

As per me, the best way to go to the top would be to not take the rental, Instead, bring your own gum boots and a snow stud attachment for boots. If you are able to walk and have time, you can hike to the top of the hill and there is no better shoes for this terrain then the military jungle boots combined with the snow studs.

once you reach the top where the snow is loose and you want to have fun, simply swap your boots for the waterproof gum boots.

However, we did just the opposite, we rented gum boots, we took a mule ride to the top which was scary in itself with the mules slipping in the hard snow and the road is almost devastated by mule dung.

Once you reach the top, it is fairly clean and you can go for adventure activities or head out to the zoo+museum. Or you can enjoy in the snow as much as you like, just remember, you are on top of a hill and do not go to the edges as it seems not much, but if you slide down on the wrong side, you need to wait for an emergency rescue team to pull you up.

I would suggest you need to keep a complete day to visit Kufri.

After we descended from Kufri, we went to our hotel rooms, had dinner and went straight to the bed.

Today we are scheduled to travel back to Delhi. We had booked a toy train ride from Shimla and from there we had reserved seats in Shatabdi express to Delhi. Till now I had seen photos of the toy train of Shimla in pictures and videos but the experience was completely different. It was just awesome and can't be described in words.

The stations are however, worth mentioning, some of them were even smaller than the bus-stops in Delhi. However, the tracks were clean and the stations well maintained. I would suggest you to take this ride once. Just take the left side seat for the best view if you are travelling from Shimla to Kalka and the vice versa.

One thing I would like to mention is that I would like to visit Shimla once more, on bikes, with Kanishk and Kartik and this time I will drive. I will look forward to this day.

Hi, I am Chandan

I am a traveller, photographer and a tech-savvy person.

Through this blog, I will help you find unexplored destinations all around India.

Also, sometimes, I will share information about travel and photography tips.

Lava: Not as hot as it sounds, but a small beautiful hill town

Hemis Festival: Your window to get a glimpse of the magical realm of Ladakh

Peora – An unexplored destination in the hills.